King & Moffatt Building Services currently have over 60 apprentices on site and in classrooms throughout Ireland, the United Kingdom and Mainland Europe.

Apprenticeships are a vital way for people who want to be involved in construction industry to learn trades while they are on the job.  Our apprentices are given the opportunity to work across a number of different sectors, thus, expanding and strengthening their capabilities and knowledge. We sincerely believe that King & Moffatt produce the best electricians through our apprenticeships.

In Ireland King & Moffatt see apprentices as one of the key contributing factors to our success and take great pride in having developed many apprentices into electricians who are still with the company to this day. Further still some have even gone on and advanced to the roles of Site Supervisor, Project Manager and Contracts Manager in the company. 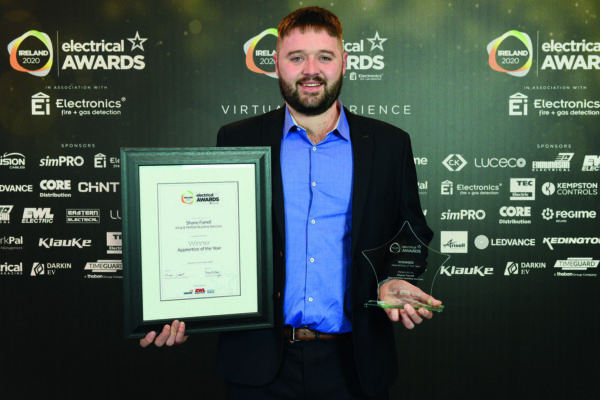 In the United Kingdom we have partnered with Birmingham Electrical Training to bring apprentices through the UK system.

See what two of our current apprentices have to say about their experiences!!

What made you want to pursue an Electrical apprenticeship?

I found myself unemployed in a recession. After a month out of work with no jobs available, I enquired about the apprenticeship & thankfully was accepted.

Would you recommend it to others?

I would absolutely recommend it to anyone who is up for a challenge & is interested in acquiring a skill for life.

What was the process like for getting an apprenticeship?

I found it relatively easy, being 36 years of age at the time, & with a young family, made it less of a gamble for King & Moffatt to take me on.

What have been your most important learnings so far?

That hard work pays off. If an apprentice shows a willingness to work hard in Phase 1, even if it is just cleaning up, they will soon be rewarded with better work.

How have you found the SOLAS college phases?

It was unusual at first, being 20 years since I had last sat in a classroom. What I have found about the SOLAS phases is that if you pay attention in the classes & do the work, the exams nearly take care of themselves.

What important skills have you found most valuable or gained during the apprenticeship so far?

Planning out tasks makes them much easier to complete within a given time, while also being able to adapt to changing situations, keeping track of what needs to be completed.

What have you enjoyed most about it?

Working with people of varying skill levels, you can learn something from everyone you work with.

What is a typical day for yourself with King & Moffatt as an Apprentice?

Every day is different, which keeps the skill levels high. One day you could be fitting containment, the next day you could be wiring socket or lighting circuits, or bring power to larger machines. The variation is always good.

What made you want to pursue an Electrical apprenticeship?

I wanted a job that was hands on and when I did research into different types of trade jobs Electrical stood out to me the most.

Would you recommend it to others?

What was the process like for getting an apprenticeship?

Much the same as a normal job, with application and interview.

What have been your most important learnings so far?

How have you found the SOLAS college phases?

So far I found them interesting.

What important skills have you found most valuable or gained during the apprenticeship so far?

What have you enjoyed most about it?

The variety of work involved in the job.

What is a typical day for yourself with King and Moffatt as an apprentice?

Anything from installing containment, equipment, or machines to wiring or testing panels!